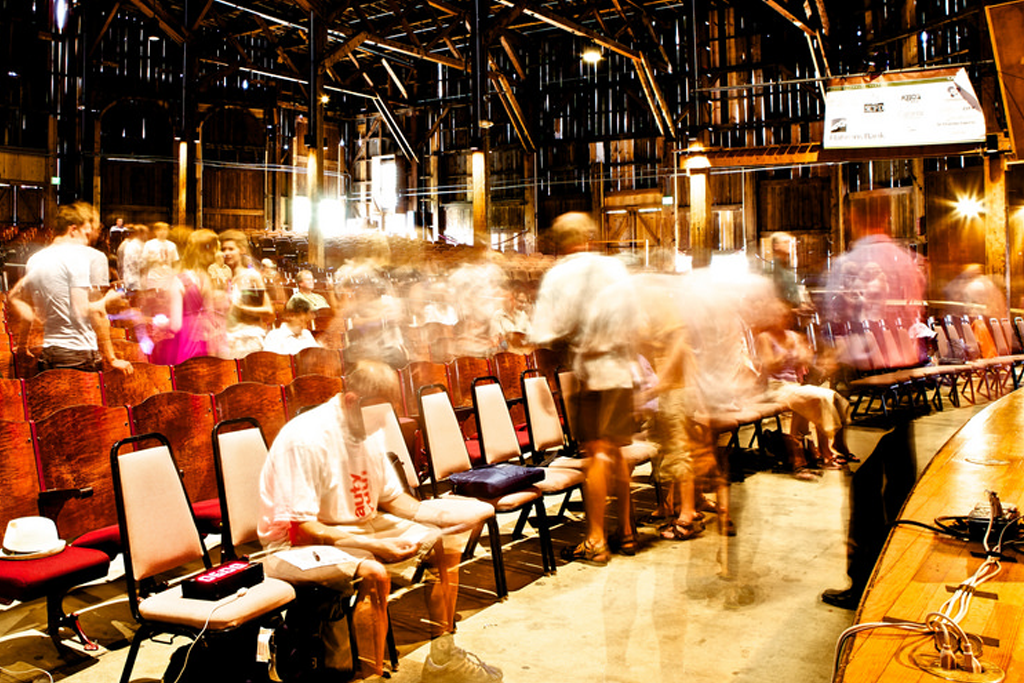 TEDxBoulderSalons are small, intimate events to keep the Boulder community engaged between our regular events.

If you have a specific topic or speaker you would like to see explored at a Salon, please fill out this form. We are always open to new ideas!

Join TEDxBoulderSalon to hear the untold stories of Colorado’s past. We’re talking radical pioneers, colorful outlaws and the love-sick miners that shaped our state. Discount Ghost Stories is an exciting musical experience that blends Rocky Mountain folk with Colorado folklore for a foot-stomping party in the backyard of Boulder’s legendary Trident Booksellers & Cafe.

Founding Artistic Director and TEDxBoulder Speaker, Pesha Rudnick, and Boulder’s own Local Theater Company have gathered some of the greatest musicians and storytellers in the Front Range for this unique event in which performers embody the “ghosts” of our state’s past and tell their unique stories, all to a rocking score.

We’re excited for a night of folklore and song on the transformed back patio of Trident on Wednesday, June 26th. Get ready for a night of boot stompin’ and ghostly tales. Not for the easily spooked…

Paper Cut: A Play and Conversation

All seats reserved.
Thursday, November 8, 2018 at 7:30pm
$20 ticket with code TEDx
To register go to this link and go for the November 8th show: https://thedairy.org/Online/default.asp?BOparam::WScontent::loadArticle::permalink=LOCAL

About the show
Is courage confined to combat? Kyle has just returned from war a very different man, forced to confront an emotional minefield back at home. Brimming with heart and love, Paper Cut is a raw exploration of the physical and emotional toll of our military, and a reminder that heroes don’t always wear uniforms.

Join us after the show for free food & discounted drinks at the Embassy Suites Bar at 9pm for a LocalGATHERS Chat and Chew with Local Theater Company artists and Artistic Director, Pesha Rudnick.

Cost: $10 - Purchase tickets here.
Students or Community Members who need a discount code can use "Student" for a free ticket; please RSVP, as seating is limited.

Why You Should Come:

The Arctic is one of the most rapidly changing ecosystems on the planet. Rising greenhouse gases have profoundly disrupted weather and environmental patterns that, while extreme, have shown stability over several thousand years. No more. The Arctic is melting before our eyes.

Understanding how the Arctic is changing—and how it will change as greenhouse gases continue to rise —is critical for commerce, national defense, and for rich oceanic and terrestrial ecosystems and environments that have supported indigenous peoples for 10,000 years. The observed dramatic changes in the Arctic climate system, including fast retreat of Arctic sea, can be simulated and understood using numerical models run on supercomputers.

This TEDxBoulderSalon will highlight the rich scientific expertise located here in Boulder to open a window on this imperiled region and its people.

Some of the nation’s experts in Arctic change will staff posters scattered around the museum’s Paleontology Hall. What captures your interest? Head to one or more posters and talk with researchers about their findings and interests. Posters topics and expertise may include:

How scientists helped prevent catastrophic destruction of the ozone layer

Thirty years ago, in an effort to avoid damaging the Earth’s fraying ozone layer, 197 countries adopted the Montreal Protocol. The release of gases from spray cans, refrigerators, fire retardants, and many other industrial applications were reaching high into the stratosphere, where they began to eat away at the ozone layer. That layer protects our planet from cancer-causing ultraviolet radiation—so when it frays or holes form, incoming UV radiation can harm plants and people alike.

In the 1970s and 80s, scientists in Boulder helped identify the chemical and physical processes that maintain the ozone layer. And since then, they have remained critical in efforts to understand the atmospheric impacts of the Montreal Protocol. What has happened to those chemicals that were wearing away at ozone: Have they dropped out of the atmosphere? What’s used in their place, and do those substitute chemicals pose problems? And what about the ozone layer itself—is it still depleted? Is it coming back?

Join us at NOAA for a series of hands-on mini-exhibits and engage in a panel discussion about stratospheric ozone science and history, including policy.

Sean Davis, a CU Boulder/NOAA atmospheric scientist, will be our EMCEE for the evening. He studies the relationship between climate change and the composition of Earth's stratosphere, and presented the 2017 TEDxBoulder talk “Lessons from the World Avoided.”

Due to security at the NOAA facility, you must register for this event by 5pm March 26. You will need to walk through a metal detector, and if you arrive by car, your car will be searched. Please bring a valid driver’s license, and foreign nationals must present a valid passport or a permanent resident ID ("green card"). More information.

Theme: Wisdom From Everything

“People are uncomfortable when women are powerful.” Nineteen-year-old Syrian refugee Farzana is stuck. Once the top student in her school, she’s now educating girls in Zaatari, the largest refugee camp in the world. But when an older Jordanian doctor offers Farzana an education in exchange for marriage, she takes the chance—and finds herself embroiled in her new husband’s bizarre plot to redeem himself. Wisdom From Everything is one woman’s stirring story of sacrifice, hope, and resilience.

After the performance, participate in an Audience Conversation around the topics of the play—and what it means for Boulder—with artist Mare Trevathan. 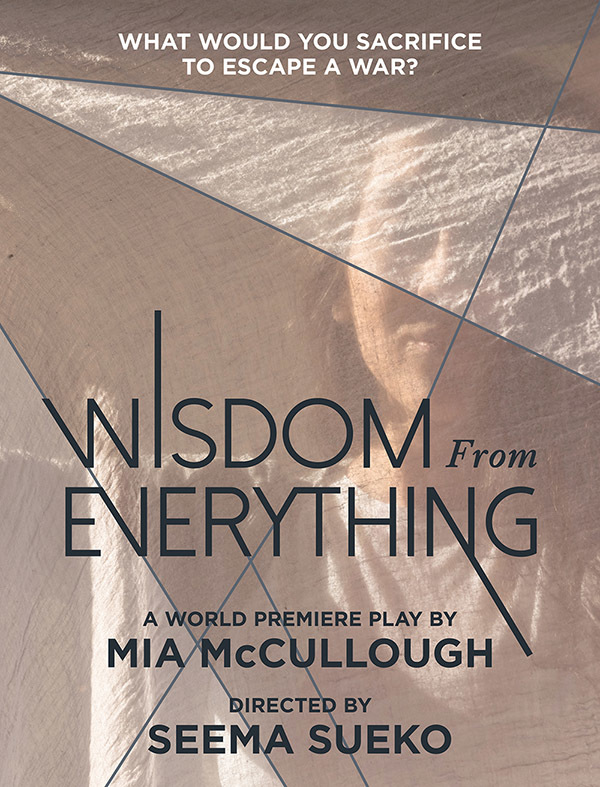 Theme: Identifying & Acting on Your Passion

Being the person who makes things happens becomes much easier when you’re passionate about what you’re doing.

Join us and hear the inspiring stories of how people in our community found their passions, connected, and inspired others to do the same. This fun and energizing event may inspire you to solve hard problems and challenge yourself to take action or a new direction in your life.

Kendra Prospero will moderate the conversation among panelists:

The Boring Company* is working on projects in LA and Baltimore. What would happen to the Boulder Denver commute if it only took 12 minutes? How would this impact urban planning goals for Boulder and the cities between here and Denver?

Would this help resolve the issue of 60k in-commuters a day?

Come hear and discuss these and other topics. Only 90 seats, so get your tickets soon.

In partnership with TEDxCU and BoulderTalks 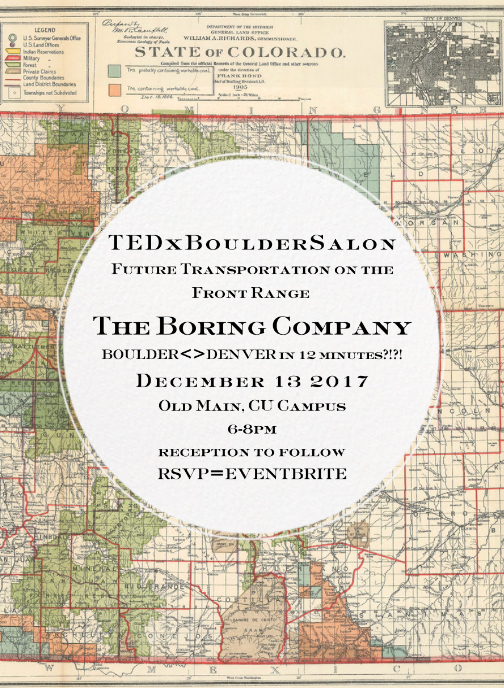 FastTracks/RTD History: where is the train
- John Tayer: CEO of Boulder Chamber of Commerce

Theme: Local Theater Company: The Rape of the Sabine Women by Grace B. Matthais

We are going to watch the Local Theater Company: The Rape of the Sabine Women by Grace B. Matthais.

Our first salon will be a post-event discussion of TEDxBoulder, and an open vision planning session to begin strategizing our next big events as well as additional monthly TEDxBoulderSalons.

The Salon will be held on October 12th at 5:30pm at Trident on the back patio.